At his best, Ronald Reagan could redce an audience to tears with his speeches. I saw him do it on a number of occasions — when the space shuttle Challenger exploded in January 1985, when Reagan accepted his renomination as the Republican standard bearer in the summer of 1984.

Speechwriter Peggy Noonan was often responsible for putting the words in Reagan's mouth that accomplished that. Noonan, more than anyone else, was responsible for Reagan&'s moniker

I'll be the the first to acknowledge that Noonan is a gifted writer. But few of Reagan's speeches could match "The Boys of Pointe du Hoc" that was delivered on the 40th anniversary of the D–Day invasion 40 years ago today.

That really wasn't surprising. D–Day was the turning point of World War II, and the men who fought in it truly could be said to have saved the free world. Reagan paid tribute to them when many were still living.
Posted by David Goodloe at Wednesday, June 06, 2018 No comments: 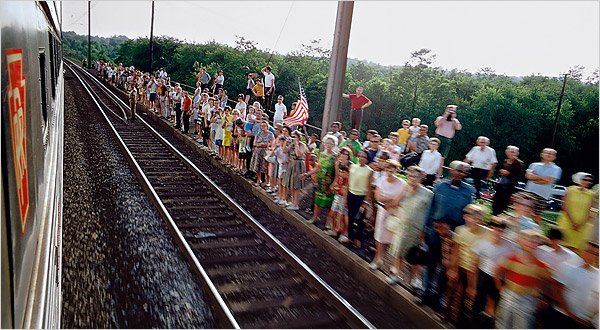 "Tragedy is a tool for the living to gain wisdom, not a guide by which to live."

Today is the 50th anniversary of the fatal shooting of Sen. Robert F. Kennedy in Los Angeles after he had declared victory in the California presidential primary.

He didn't die immediately. He lingered for about 24 hours.

I have written on this blog before about my memories of that event. What I am thinking about today is the aftermath — when his body was brought back to New York for the funeral, then carried by train to Washington where he was buried next to his brother in Arlington Cemetery.

I remember watching the funeral service on TV — and seeing Sen. Edward Kennedy's moving eulogy to his brother. I remember the stoic demeanor of Kennedy's widow, Ethel. In the context of what had occurred in the preceding days, it was heart–breaking.

But I suppose my dominant memory is of the train making its way from New York to Washington. It is a distance of only about 200 miles — ordinarily a four–hour trip by train, historian Theodore White observed, but more than doubled by the crowds that came out to pay their respects. It seemed as if nearly everyone who lived between those two cities came out and stood beside the railroad tracks until the train carrying Kennedy's body went by.

At first, the crowds were mostly small groups, but as the train proceeded, the crowds grew larger, standing three, four, five rows deep, sometimes more. Every segment of the American population was represented — young, old, black, white, affluent, poor. Sometimes they spilled onto the tracks, forcing the train to slow down even more. My memory is that a handful of people may have been killed after being struck by the train.

There have been museum exhibits recently that sought to capture that experience for those who have no memory of that time, but the sensation is incomplete without knowledge of the signs that were always present during Kennedy's life — and followed him to his grave. 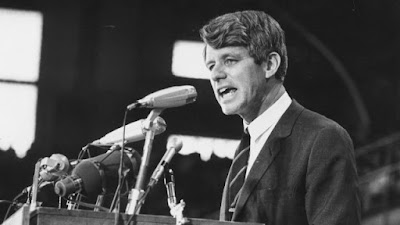 When Kennedy walked among us, those signs encouraged him to seek the presidency or demanded justice after he made his decision to run. After he was shot and his fate was still unknown but widely anticipated, the signs read "Pray for Bobby." Along the train route, they simply said, "Goodbye" or "So long."

"There were the family groups: husband holding sobbing wife, arm around her shoulders, trying to comfort her," he wrote. "Five nuns in a yellow pickup truck, tiptoeing high to see. A very fat father with three fat boys, he with his hand over his heart, each of the boys giving a different variant of the Boy Scout or school salute. And the people: the men from the great factories that line the tracks, standing at ease as they were taught as infantrymen, their arms folded over chests. Women on the back porches of the slum neighborhoods that line the tracks, in their housedresses, with ever–present rollers in their hair, crying. People in buildings, leaning from office windows, on the flat roofs of industrial plants, on the bluffs of the rivers, on the embankments of the railway cuts, a crust on every ridge and height. Pleasure boats in the rivers lined up in flotillas; automobiles parked on all the viaducts that crossed the line of the train. Brass bands — police bands, school bands, Catholic bands. Flags: individual flags dropped in salute by middle–aged men as the train passed, flags at half–staff from every public building on the way, entire classes of schoolchildren holding the little eight–by–ten flags, in that peppermint–striped flutter that marks every campaign trip. He turned them on, black and white, rich and poor. And they cried."

No other politician in modern history could connect with as many disparate groups as Bobby Kennedy. It is something no one tries to do anymore because it is so difficult to achieve. And in the blink of an eye, he was gone.
Posted by David Goodloe at Tuesday, June 05, 2018 No comments: