A Tribute to My Mother 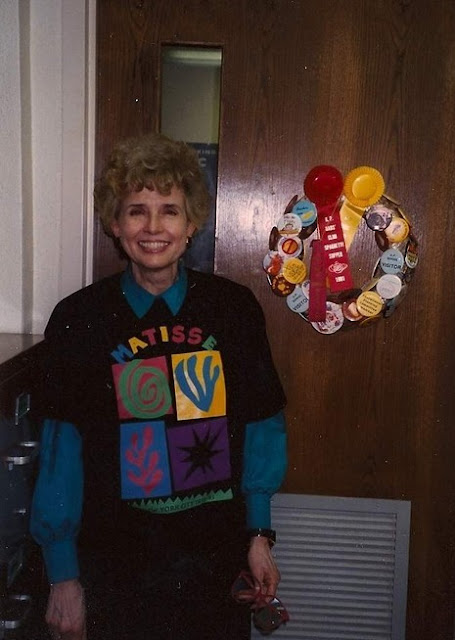 It will be my great honor and privilege later today to be a guest at a special ceremony honoring my mother.

Mom was a first–grade teacher in many places but exclusively in Dallas, Texas for the last dozen years of her life. It is also where my parents were brought up so when she and my father moved back to Dallas, they already had a built–in network of friends since most of their friends had remained in Dallas all their lives or, like my parents, had returned after living somewhere else.

I think that appealed to Mom's sense of order. She was back where her life began, helping a new generation gets its start. She might not have articulated it quite that way, but I think that is as good an explanation as any.

Mom also had a flair for the dramatic.

After she died, we received a letter from an old friend, who observed that Mom probably belonged on a stage — and I couldn't argue with that — but in the absence of a career on the stage, the next–best profession would be teacher. And I know how good Mom must have been at that. After all, she raised me. I know how she was with kids. When I was a child and my family took road trips in the summers, Mom always picked out a book to read to my brother and me to help kill the long hours in the car. She was very engaging, and although we always saw incredible things on our family trips, I always thought the best part of the trips was the trips themselves and Mom's spirited narrations of the works of C.S. Lewis and Laura Ingalls Wilder.

I don't know how well those still–living friends remember the weekend of that flash flood. I will never forget it. I was living in Norman, Okla., about a three–hour drive from Dallas, and I was about to wrap up my third year of teaching journalism at the University of Oklahoma. Looking back, I can see that I wasn't as good at teaching as I fancied myself to be, but at the time I liked to think of myself as carrying on a family tradition (my father's parents were also teachers).

It was a rainy Friday night in this part of the country. The spring had been unusually wet, and the ground was saturated. When the storm went through that day, there was no place for the water to go.

My parents were caught in a flash flood at a spot that had a history of vulnerability to rising water. My father was pinned between the car and the guardrail, which probably saved his life but left him with a pinched nerve in his left arm (and he is left–handed). My mother was swept away. Her body was found a few hours later.

Today's ceremony includes the presentation of a redesigned bridge at the spot where she was swept away. These changes are expected to prevent tragedies like the one involving my parents.

That flood changed everything for me. My mother was killed, and my father was disabled. I spent that summer helping my father and making plans to return to Dallas when my commitment to OU ended after the next academic year.

It also changed the way I think of death. I used to think a lingering death was the worst way to go, at least as far as the survivors were concerned. But after Mom died, I realized that an out–of–the–blue death is just as difficult but in different ways.

I'm glad that time is behind me, and I am glad to be able to honor my mother today.
Posted by David Goodloe at Wednesday, October 04, 2017 No comments: