I remember this night 40 years ago. Quite well.

A friend of mine and I were camping. Actually, we were staying in a campground that, as I recall, furnished the tents all set up and everything. You did have to provide your own sleeping bag, but, otherwise, it was kind of like being in a canvas motel. Still, my friend and I felt so grown up to be allowed to camp by ourselves.

There were no television sets in the tents, but I remember bringing a portable TV with me because that week was the Republican convention in Kansas City, and President Gerald Ford and former Gov. Ronald Reagan were locked in a battle for the nomination that neither had managed to secure during the primaries. As long as I can remember, I have been a political junkie, and conventions always appealed to me — even though I realized from an early age that they were biased and would not present a fair and balanced picture of the choices. The nominee from the opposing party is always demonized at a convention.

Ford wound up winning that nomination, and he gave his acceptance speech 40 years ago tonight. It was his night, and there was a lot riding on it. Jimmy Carter, who had been nominated by the Democrats the month before, led the polls by double digits. Commentators for the three major TV networks kept reminding viewers that it was the pivotal moment in Ford's presidency. It was, they said, the most important speech of his life.

Now, Ford never was a great speaker, but he probably delivered the best speech of his political career that night. However, that isn't what makes this night from 1976 so memorable. It was what Ford did after he gave his speech. He invited Reagan — who was seated with his wife in the convention hall — to come to the podium and say a few words.

It was a truly generous gesture on Ford's part — and it was a history–altering moment for Reagan and America.

When that convention was over, Reagan could have returned to California and gone into retirement with his head held high, assured that he had given a run for the presidency his best shot and had come up short. After all, he would be nearly 70 at the time of the next presidential election, and no one had ever been elected president at such an advanced age.

But he accepted the invitation and made his way from wherever he had been sitting in the convention hall (I think it was in the back) to the podium where Ford and other leading Republicans waited for him.

The speech Reagan delivered that night left many Republicans wondering if they had chosen the right candidate to lead their ticket against Carter that fall — and may well have been what led to Reagan's successful bid for the presidency in 1980.

It wasn't a great speech. It appeared mostly ad libbed, but upon reflection I concluded that speaking on the mashed potato circuit, as well as his acting career and the time he spent broadcasting the play by play of sporting events on the radio, had prepared him for that moment.

Reagan famously used index cards to help him get started on topics when he gave speeches. To the casual observer, he seemed to be speaking off the cuff, but he was giving virtually the same speech he had given hundreds, if not thousands, of times.

The speech he gave 40 years ago tonight was a short one. It lasted only a few minutes, and it wasn't especially eloquent. But it was memorable nonetheless. 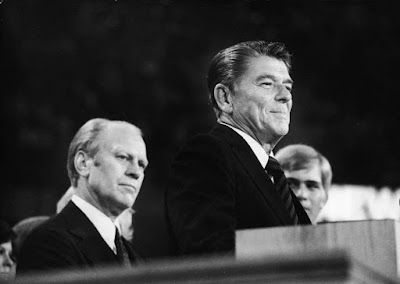 He started out by thanking President Ford and the delegates for their warm reception. It was the year of the American bicentennial, and Reagan observed that he had been asked recently "to write a letter for a time capsule that is going to be opened in Los Angeles 100 years from now, on our tricentennial. They suggested I write something about the problems and the issues today."

He prepared for this task, Reagan said, by "riding down the coast in an automobile, looking at the blue Pacific out on one side and the Santa Ynez Mountains on the other, and I couldn't help but wonder if it was going to be that beautiful 100 years from now as it was on that summer day."

Undoubtedly, that was a story he had told in speeches before. I don't recall hearing one of Reagan's stump speeches that year, but it seems like the kind of story he would have used frequently. And, because it was the bicentennial year, the story had a fairly short shelf life.

Then Reagan really turned whimsical, observing that the people who would read the letter a century later would know if the Americans of Reagan's time had fulfilled their missions.

"This is our challenge," Reagan told the spellbound delegates, "and this is why here in this hall tonight, better than we have ever done before, we have got to quit talking to each other and about each other and go out and communicate to the world that we may be fewer in numbers than we have ever been, but we carry the message they are waiting for.

"We must go forth from here united, determined that what a great general said a few years ago is true: There is no substitute for victory, Mr. President."

Ford, of course, lost that election to Carter, but he made a remarkable comeback in the polls, closing the gap significantly by Election Day. Reagan, running as the Republican nominee four years later, defeated Carter.

I don't know when Reagan decided to run for president again, but I have heard that Reagan's wife Nancy was a decisive influence, as she almost always was, on that decision. According to the accounts I have heard and read, Mrs. Reagan persuaded a reluctant Reagan to run in 1980.

By 1984, Reagan had been the target of an assassination attempt, and I have heard that Mrs. Reagan was against her husband seeking a second term. The president overruled her on that one.

But apparently he gave in to her in 1980 — and the course of history was changed.

I was not a Reagan fan when he was president, and I always wondered what it was about him that so many found so appealing.

Long after he left the White House, I think I figured it out. Yes, he was called "The Great Communicator," and he was more effective than most presidents at using what Teddy Roosevelt called "the bully pulpit& of the presidency. I always knew that.

But why was he so effective?

I think it was because he genuinely enjoyed telling stories, whether they were serious or funny. He had that rare ability to move people to tears or to laughter with a few words — even if they disagreed on the issues.

It is one of the unwritten requirements of the presidency that whoever is chosen to lead this nation must do the cornball things from time to time, and, frankly, no one did cornball better than Ronald Reagan.
Posted by David Goodloe at Friday, August 19, 2016 No comments: