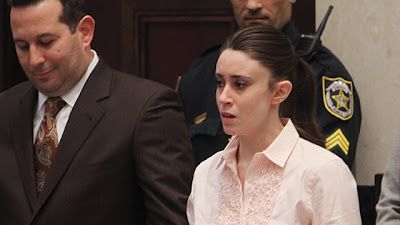 Major Tetley (Frank Conroy): Other men with families have had to die for this sort of thing. It's too bad, but it's justice.

Donald Martin (Dana Andrews): Justice? What do you care about justice? You don't even care whether you've got the right men or not. All you know is you've lost something, and somebody's got to be punished.

I've been struggling to find the truth, whatever it may be, in yesterday's verdict in the Casey Anthony trial.

But truth can be a slippery thing.

I didn't watch the whole trial, but I know several people who did. They have been expressing their opinions of the verdict — rather loudly — ever since. They didn't like it.

I have found a lot of this on Facebook. I don't follow Twitter, but, apparently, it's been happening a lot there, too. Everyone seems to be convinced that the jury made the wrong decision.

That really creates a conflict for me. See, I was brought up to believe in the rule of law. That didn't mean blind faith in the infallibility of law enforcement or anyone else. In fact, it didn't mean faith in people at all. It did mean faith in a system of justice that protects everyone's rights.

It doesn't always work that way. And sometimes juries reach different conclusions than the public at large. I've heard several references to the O.J. Simpson case, which may rival the Anthony case in terms of public fascination, but it was different in many ways.

It was a different time, for one thing. Technology was different. If texting and the internet had been around when O.J. was on trial, I'm sure word would have spread as rapidly as it did yesterday (well, technically, the internet did exist in those days, but it was not nearly as pervasive as it is today).

As it was, word spread pretty quickly in 1995, and the negative response seemed to be every bit as vocal. My memory is that many people believed the wrong verdict had been reached.

And the issues that were raised by the verdicts were different, too. When O.J. was acquitted, I heard many people suggest it was a form of jury nullification. Whether that was true or not, it was clear, from surveys that were taken immediately after the verdict was announced, that people tended to see the case differently, depending upon their race.

If the same logic could be applied to the Anthony case, my inclination would be to think that Casey Anthony would find some support from other women. But, on the contrary, I have encountered the most vitriolic condemnation of Anthony from other women.

I guess it's that maternal thing. Most women appear to believe that Anthony murdered her child. To be sure, that is a terrible offense. Some people believe it is the worst thing a person can do, and anyone who is guilty of it can never be forgiven.

I suppose, if you are such a person, if you believe that Casey Anthony killed her child, either deliberately or unintentionally, regardless of whether the evidence supports that conclusion, the fact that she was acquitted must be difficult to stomach.

But I think it is an indication that the system is working as it was designed to work — and, for that, I am thankful.

Now, I have admitted — and I will continue to admit — that I didn't watch the whole trial, but the burden of proof is on the prosecution.

And, in the eyes of the law, circumstantial evidence is not enough to convict someone of anything.

So, when the jury acquitted the defendant, I felt I had to believe that the jury was not persuaded by the evidence that was presented by the prosecution.

I have served on some juries in my life, and I know the kind of instructions they receive. They are told not to consider anything that is not presented as evidence. If someone says something from the witness stand that is considered inadmissible, they are instructed to disregard it (although, as Jimmy Stewart correctly told Ben Gazzara in "Anatomy of a Murder," jurors can't really disregard something they have already heard).

I've been defending the concept of "innocent until proven guilty" a lot. If the jury didn't convict Anthony, I reason, it is because the prosecution did not present a persuasive case under the law.

Well, the people who watched the trial were convinced, the other side of my brain counters.

Yes, but they had the advantage (if one wants to call it that) of hearing the opinions and speculation of the so–called "talking heads," who may — occasionally — have valuable insights to share but more often than not, in my experience, they simply fan the flames of the kind of mob mentality that I see emerging from this trial.

Their opinions have no value as evidence.

Largely because of the time that elapsed between the child's death and the discovery of her remains, much of the evidence that most juries require isn't available. An exact cause of death cannot be determined (an acquaintance of mine has suggested that the jury could not rule out either natural causes or some kind of accident). The exact time of death cannot be determined, either.

For that matter, I have heard no one mention proof of a motive. Based on the accounts I have read and heard, the defendant and her child had a good relationship. What was the defendant's motive for killing her? Is there evidence, not supposition, to support it?

And my acquaintance suggests that the grandfather's apparent participation in the subsequent coverup could be explained as something well intentioned that grew progressively complex and ultimately fell apart.

But my acquaintance is one of the few who have been guided by reason rather than emotion.

One old friend of mine posted a question about justice on Facebook after the verdict was announced. "Where is it?" he asked and then invited others to weigh in. "What do you think?"

So I expressed my opinion. But it turned out that an exchange of ideas was not what he or the rest of his Me–Too Chorus really wanted.

Many insisted that they knew what God thinks and wants — which I find presumptuous, not to mention frightening. 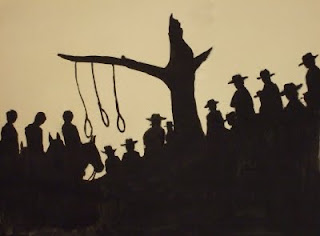 I remember seeing such a mob mentality dramatized in "The Ox–Bow Incident."

Did you ever see that movie? It was set in the Old West. A lynch mob was formed in a small town to pursue some suspects in the murder of a beloved friend and neighbor.

This mob knew who was guilty — and saw no need to wait for a legitimate judge to come to town so they could go through the formality of a trial. That was a waste of time — and money.

So they chased down the suspects and strung them up — only to discover that their victims were innocent.

That movie was made nearly 70 years ago, but it still has relevance in today's world.

It certainly has relevance, I believe, to the Casey Anthony verdict.

Because even if she is guilty, I'd rather run the risk of allowing a few guilty people to go free from time to time than let vigilante justice replace the rule of law — and permit the conviction of even one innocent man.
Posted by David Goodloe at Wednesday, July 06, 2011